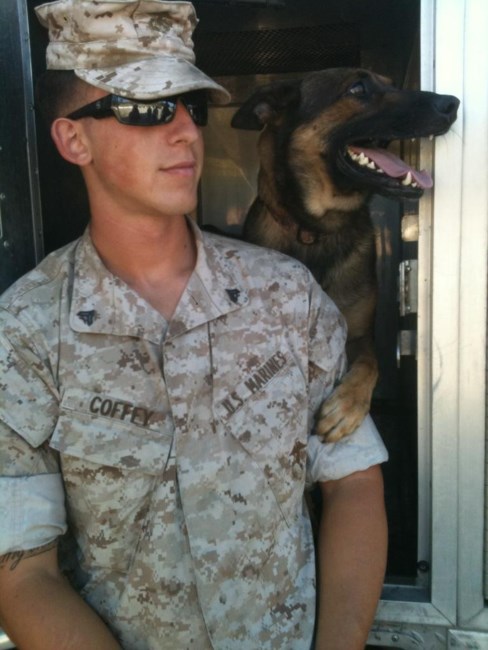 From the Memorial Service

June 4, 2012 – Firefighters and military, predominantly USMC came to pay their respects to a young Marine, CPL Keaton Coffey, who was killed in combat in Afghanistan on May 24th. Being a member of a Gold Star family, I have gotten to a place where for my own piece of mind I often kind of go to that “professional place” where I don’t really take in anything but the visuals I’m catching with my lens. But CPL Coffey’s memorial was impossible to tune out in any way.

Heaven cried over us, as Oregon’s Patriot Guard Riders dotted the drives and hills with beautiful crisp American flags. Firefighters in their Class A’s stood in the rain, their rigs bearing Keaton’s name and black bands over their numbers, close by. CPL Coffey was not only a Marine, he was the son of a firefighter, who had planned to follow in his fathers boots. He was young and handsome, a United States Marine, who lived an obviously active life. And though it’s never fair to lose anyone, it must be especially hard right now for a family that had to go from planning a wedding that would have happened just seven weeks after he was killed in combat, to this memorial. At the cemetery, his lovely fiancee sat with a red rose in her hands, head bowed. On the table back at the church, among remembrance items and wonderful photos of a life well lived was the topper that would have graced their wedding cake. It is always hard to see our troops or first responders in uniform cry, and while most people held it together it was impossible not to catch the sniffles and wet eyes throughout. Listening as the story was told of how CPL Coffey’s mother introduced him to his sweetheart, Brittany Dygert made every heart swell at the promise of these two lives just starting together. If their love story didn’t touch your heart, watching his father take the young pallbearer’s into his arms and then watching them all lock arms and share a private moment before our eyes is something I will never forget. Please remember CPL Keaton Coffey, and keep his loved ones in your thoughts and prayers. Rest in peace & Godspeed.

Keaton Grant Coffey attended Damascus Christian School from September, 1994 through May, 2007-from Kindergarten through Graduation. He was born in Portland on August 21,1989 and raised his entire life in Boring, where he played in the forest and fields where his family kept pet goats along with his Scottish terrier, Kelty. He collected bugs, rocks, snakes and frogs. He attended church at Good Shepherd Community and worked at Damascus Safeway from his sophomore year of high school through his first year at George Fox University.

Keaton committed his life to Christ in the third grade. He participated in plays, sports, and volunteered in various school activities and community service while at DCS and made lifelong friends through his classmates. He loved studying the Sciences and Creation with Mr. Hayley. He loved reading, watching movies, and surfing at the coast. He traveled with his family to Europe and Japan and all over the US. Staying physically fit became a goal as he grew to be a man.

Keaton had a desire to serve in the military that began on July 1, 2008 when he declared his calling by signing into the United States Marine Corps. He enlisted on Aug. 18, 2008 and traveled to San Diego to begin his training. His military journey began as a Military Police Officer and he trained in Missouri before being assigned to Camp Pendleton CA. His desire to serve actively in a war zone was fulfilled when he volunteered to fill a vacancy as a Field MP and he was sent to Afghanistan from March, 2010 through October, 2010 for his first deployment.

He came home and was accepted into K9 School in Texas as a Military Working Dog Handler and met his partner, Denny, a German Shepherd. He was so skilled in training Denny that they deployed together in December of 2011.
Keaton had become engaged shortly before to the love of his life, Brittany Dygert, also from Boring. They had met only six months prior after being introduced through his mother. Their plans were to marry after his deployment in July 2012 and he would finish out his service and continue his education to become a firefighter like his father.

God had other plans for Keaton and his life was taken on May, 24, 2012 by a sniper that fatally wounded him as Keaton was working with Special Forces in a dangerous region of Afghanistan. He was brought home to be buried with honors at Willamette National Cemetery.
We know that Keaton now resides in Heaven with his Father and is in the company of Heroes like himself. We treasure the education he had at Damascus Christian as a primary foundation block in his life and we have the assurance of our faith in that he rests securely in our Lord.

John 15:13
Greater love has no one than this, than to lay down one’s life for his friends.
Psalm 23 was his prayer for his second deployment:
The Lord is my shepherd; I shall not want. He maketh me to lie down in green pastures: he leadeth me beside the still waters. He restoreth my soul: he leadeth me in the paths of righteousness for his name’s sake. Yea, though I walk through the valley of the shadow of death, I will fear no evil: for thou art with me; thy rod and thy staff they comfort me. Thou preparest a table before me in the presence of mine enemies: thou anointest my head with oil; my cup runneth over. Surely goodness and mercy shall follow me all the days of my life: and I will dwell in the house of the Lord for ever.

Tribute to Honor was founded by Grant Coffey. Their mission is:

We HONOR and SUPPORT our first responder and military Heroes and their families through locally based support projects and actions.

Would you prayerfully consider providing a way for these students to continue at DCS? Your gift of $50, $500, $5000 or more is an investment in lives that will radiate God’s love and grace to a world that yearns for the hope found in Christ Jesus.